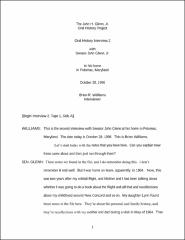 This interview is based on notes Senator Glenn made during a conversation he had with his parents in 1964 about life in New Concord, Ohio during Senator Glenn’s boyhood. Clara Glenn enjoyed poetry and would recite poems while cooking the family dinner. Senator Glenn’s stories include a serious bicycle accident, fishing with a safety pin as a hook, and training beagles to hunt rabbits. He dug and sold sassafras and rhubarb as a boy to earn money. In later years he worked with his father in the plumbing business. He remembers receiving a used electric train for Christmas. It and Lincoln Logs were a part of many Christmas decorations. Christmas was a meaningful and interesting time for the Glenn family. Senator Glenn describes several of the tricks boys used to celebrate Halloween. In the winter he earned money by setting a trap line and selling the furs. A game played at night was "Capture the Flag." He and his friends earned money by shoveling snow to open county roads after a blizzard in 1936 or 1937. The automobile Senator Glenn drove as a teenager, referred to as "The Cruiser," is a source of many memories, such as sliding in a muddy field and painting the car with a hand fly sprayer. In the spring of 1942, while waiting to be inducted as a U.S. Navy flight cadet, Senator Glenn and a friend drove Ford tractors to plow and disk fields for local farmers. He describes the reaction of a New Concord woman to her first sonic boom when he flew above the village while making the first supersonic flight across the U.S. in 1957. Other events recalled include his favorite swimming hole at a nearby stream, caring for a flying squirrel, planting a seedling on Arbor Day, and building a crystal radio. Also included is a brief biographical sketch of his father, John H. Glenn, Sr. and information on the Glenn family background. Responsibility was a key concept in the Glenn household. The father made money, the mother kept the house and the store, and the children made good grades. Dinner was a time to share the day’s experiences. Senator Glenn recalls that New Concord was safe for children to roam the streets. The village constable did not have a lot of problems, would direct traffic for homecoming, and let the occasional "bum" stay overnight in the jail. New Concord had a volunteer fire department. Senator Glenn has vivid memories of a house burning near his home. Due to his father’s pride of being a World War I veteran, Senator Glenn was anxious to serve in World War II.