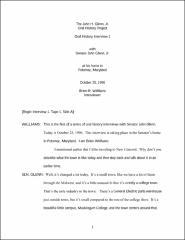 Senator John Glenn was asked about the changes which have occurred in New Concord, Ohio since his boyhood days. This interview concludes upon Senator Glenn’s completion of high school. New Concord is a small rural Midwest community of about 1,100 people. It is located approximately 60 miles east of Columbus. Southeast of New Concord are the foothills of the Appalachian mountains and the coal mining region of Ohio. All the businesses in the village were located along the Old National Trail (present day State Route 40). Just down the road from the Glenn home the road crossed a stream on a notable S-shaped bridge. Senator Glenn remembers when the road was paved with brick all the way to Columbus. Many of the buildings he remembered have been torn down. Muskingum College was and continues to be a major employer in the village. Another employer was General Electric, which had a parts warehouse just outside the village. The village had a movie theater and one or two doctors. Most of the people were Protestant and Caucasian. Minorities did not settle in New Concord because they felt more comfortable in other towns. The offices of professionals were usually closed on Wednesday afternoons. Families did most of their weekly shopping on Saturdays. People disposed of wastes and junk by burning, feeding to hogs, or dumping it into a ravine. A railroad line ran through the village. Senator Glenn’s parents were married prior to his father, John H. Glenn, Sr., going to France during World War I. After the war, Glenn, Sr. did various jobs before starting a plumbing business in New Concord. Senator Glenn’s mother, Clara Sproat Glenn, managed the store while her husband was on job sites. Senator Glenn considers New Concord as an ideal place for a boy to grow up. The community stressed responsibility to the family, church attendance, patriotism, education, and creativity. His parents suffered the deaths of two infants and problems with raising an adoptive daughter. The Glenns were close friends of the parents of Senator Glenn’s wife, Anna (Annie) Margaret Castor. Senator Glenn recalls many picnics and other social events with family and friends that rotated between homes. Patriotism was stressed on Memorial Day. John H. Glenn, Sr. played Taps on these occasions and as a boy Senator Glenn would join him in the playing of "Echo Taps." The American Legion had contests about citizenship. Education occurred in many forms. The public school was the center of formal education. Hanford Steele, the high school civics teacher, instilled in Senator Glenn an interest in government and public service. Another teacher took him on a summer trip to various cities and Montreal. Senator Glenn lettered in football, basketball, and tennis during high school. The presence of Muskingum College reminded them of studies beyond high school. The college sponsored cultural events and permitted the town youth to use the college’s gymnasium. News of the outside world came through newspapers and radio. Senator Glenn describes many types of activities he did as a boy. He earned money to buy a bicycle at age fifteen. He assisted in his father’s plumbing business and after his father began a small automotive dealership, learned to drive and repair automobiles. Senator Glenn’s interest in building model airplanes led to his obtaining a private pilot’s license while a student at Muskingum College. His pilot training enabled him to become a combat aviator with the U.S. Marine Corps during World War II. Senator Glenn married Annie Castor after completion of his flight training in 1943. Annie Glenn, an accomplished musician, played the pipe organ, an instrument Senator Glenn believes is more complex than piloting an airplane.