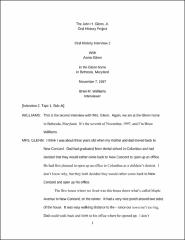 Mrs. Glenn discusses her childhood growing up in New Concord, Ohio. She first lived inside the village, but later on moved to a piece of property just outside of the village where her parents (Dr. Homer and Margaret Castor) built a new home. She describes how she and her younger sister, Jane, were free to roam around the village and visit friends and businesses. She mentions some of the various activities in which she participated as a child, such as Girl Scouts, cookouts, softball games, and playing in the town band. Numerous activities were centered on the Presbyterian Church her family attended on a regular basis. Her father was the town dentist, but also owned the family farm near Otsego in Muskingum County. The family would spend most Thursdays and Sundays at the farm, trips she and her sister really enjoyed. Mrs. Glenn attended the local schools, where she was accepted as simply one of the students even though she had a severe speech impediment that caused her to stutter eight-five percent of the time. Her teachers never made her recite in class. She compares the events and activities she experienced in her childhood with those being experienced now by her two teenage grandsons. Her parents were graduates of Muskingum College in New Concord, so she attended many athletic and other events at the college during her youth. Mrs. Glenn graduated from Muskingum College in 1942 with a major in music and minors in phys-ed and secretarial science. She goes into length about her first job after graduation, when she moved to Dayton, Ohio and worked as a secretary for a colonel in the Army Air Corps. She describes her duties and how she dealt with her speech impediment while living on her own. Mrs. Glenn provides details about her early relationship with John Glenn and points out how her parents were close friends with the Glenn family. She speaks about the activities they shared growing up and how "going steady" in high school evolved into a serious relationship that led to engagement prior to John Glenn entering military service during World War II.

Interview conducted at the Glenn home in Bethesda, Maryland.