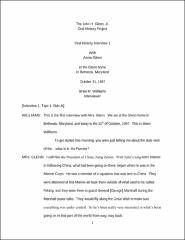 Mrs. Glenn talks about a state dinner she and Senator Glenn had just attended at the White House. The dinner was in honor of Jiang Zemin, the President of the People’s Republic of China, who she had met previously during Senator Glenn’s trips to China. She provides details about the general protocols involved in a formal state dinner at the White House and comments about various aspects of this particular event, such as the dresses wore by the women, the receiving line, and who she met. A couple of anecdotes are cited to illustrate Mrs. Glenn’s relationship with and good opinion of President William J. Clinton and his wife, Hillary. She mentions the guests who were at her table during the state dinner and explains how she tries to get people to relax and open up interesting conversations at such events. She offers as an example an event during the 1970s when former president Richard Nixon was seated at her table. She states "Well, I guess now that I can talk [after going through speech therapy for a severe speech impediment], I really like to get to know a person" seated beside her at such events. Mrs. Glenn describes a recent performance of the National Symphony Orchestra and provides details about what happened when President Clinton came on stage to conduct a piece of music written by John Phillip Sousa. Judging as a college music major, she gave the president high marks for his performance. She describes an evening when she and Senator Glenn went to the White House to view the movie Apollo 13 with the president and his family. Mrs. Glenn goes into some detail about the evening in 1962 when Vice President Lyndon B. Johnson and his wife, Lady Bird, came to the Glenn’s home for dinner. She would like to have a dinner party at her home with the Clintons, but laments the complications that arise when trying to schedule such events. Mrs. Glenn speaks at length about her present home in Bethesda, Maryland and describes various other homes she and Senator Glenn lived in over the years.

Interview conducted at the Glenn home in Bethesda, Maryland.