Senator John H. Glenn Oral History Project
JavaScript is disabled for your browser. Some features of this site may not work without it. 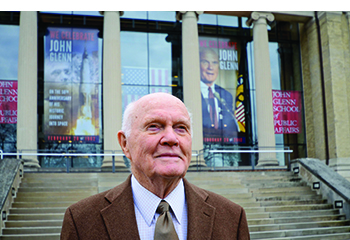 The Senator John H. Glenn Oral History Project was administered by the Ohio Congressional Archives at The Ohio State University. The project contains the tape recordings, abstracts, and transcripts of twenty-three oral history interviews with former NASA astronaut and U.S. Senator John Glenn. Brien R. Williams, under a contract with the Glenn family, conducted the first sixteen oral history sessions from 1996 to 1998. Jeffrey W. Thomas, a former archivist for the Ohio Congressional Archives, conducted the remaining seven interviews in 2008 and 2009. Subject areas covered by the interviews follow mostly in rough chronological order from John Glenn’s childhood in New Concord, Ohio to his twenty-four years (1975-1999) in the U.S. Senate.

The oral history tapes, abstracts, and transcripts produced by the project are available for public use in the reading room of the Ohio State University Archives Building, 2700 Kenny Road, Columbus, Ohio 43210. Reading room hours are from 9am - 4:30pm, Monday through Friday. Although not required, researchers are advised to contact the archivist for the Ohio Congressional Archives prior to use of the collection.

The abstracts, transcripts, and audio recordings of the oral history interviews are available in this online collection.