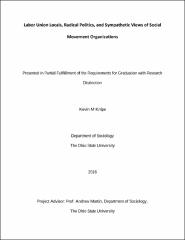 Although there are thorough bodies of literature which focus on the different organizational structures of social movement organizations and how organizations cooperate with one another, the American Labor Movement is frequently seen as homologous. While challenged frequently in sociological literature, treating labor unions as interchangeable ignores the various motivations held by union locals. As members of national unions, it is assumed that labor union locals naturally have similar levels of participation both in internal campaigns and in their participation with other national social movement organizations. Operating on this assumption, the study conducted for this article surveyed locals from the Service Employees International Union, UNITE HERE, and the Communication Workers of America. Rating these different unions as conservative, liberal, and politically radical, this study argues that politically radical labor unions are more sympathetic of feminist SMOs. However, this study also suggests that the differences in political opinions and the organizational structures of broad social movements and social movement organizations do not incite different levels of sympathy among labor union locals. Supporting the call to action put forth by Lott, this article suggests that there is a large body of literature not yet published concerning the psychology of labor unions.