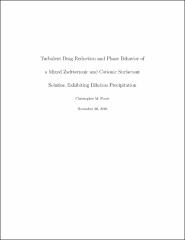 A drag reducing fluid consisting of a zwitterionic and cationic surfactant with an added counterion was observed to exhibit interesting phase behavior. At equimolar surfactant concentrations, dilution precipitation was observed. It was later noted that this system also exhibits shear precipitation. Phase diagrams were constructed to better understand the conditions under which this behavior occurs. Drag reduction data were collected using a recirculating flow system to evaluate drag reducing effectiveness. Further tests were performed using an Ares Rheometer to evaluate how the first normal stress difference is affected by the phase change. Attempts were made to quantify and describe the precipitate composition using infrared spectroscopy.