Role of Construal Level in Attentional Bias Toward Temptation 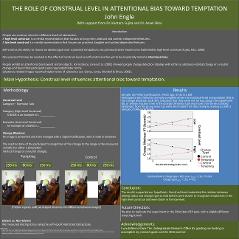 Previous work (Fujita & Han, 2009; Fujita & Roberts, 2010; Fujita, Trope, Liberman, & Levin-Sagi, 2006) has demonstrated that inducing a mindset of abstraction, i.e. high-level construal, increases people’s performance in various measures of self-control. This has been found with differing levels of automaticity, from explicit attitudes towards tempting stimuli to implicit associations with tempting stimuli. The current research sought to further investigate the level of automaticity that construal level may affect. Work in the realm of addiction has linked temptation strength with attentional bias towards temptation stimuli in a visual scene. For example, in a change blindness paradigm, drug users are quicker to identify drug related changes than neutral changes in an image, where the same is not true for control groups. We suggest that people’s attitudes towards temptations, which have been shown to be modifiable using construal manipulation, are responsible for which objects attention is directed to. To induce high or low level construal, we used a previously validated manipulation (the “Category – Exemplar” task; Fujita et al., 2006). To measure the effect of abstraction on attentional bias, we used Change Blindness, a paradigm in which participants spot a change made to a flickering picture. Our target population to test this theory is dieters. For half of the participants, the changed object was tempting (cupcake) for the others it was neutral (mug). The aim of our research was to see if construal manipulation, changed object, and self-reported dieting status would interact to predict the attentional bias in the Change Blindness task. We found that dieters in a high-level construal saw tempting stimuli slower than dieters in a low-level construal.