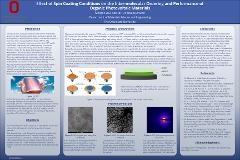 We proposed to use fluctuation electron microscope to determine the molecular ordering of organic materials, and establish connections between the ordering and important properties of organic materials, which can significantly improve the performance of organic electronics. In the past, understanding the exact nature of molecular ordering has been challenging due to the lack of experimental technique that are sensitive to the molecular ordering. While FEM is a great technique that can measure the nanoscale atomic ordering, including type, size, volume fraction etc. P3HT is material of interest and it is spin-coated onto Si substrate and then observed under FEM. Consequently, the intermolecular ordering is established as a function of spin coat temperature, RPM, concentration, annealing temperature and so on. This summer served as the first stage of this project, aimed to find a sample, which can meet operating criteria of FEM, as standard for further research. During research, contamination was initially captured; particles around the point of irritation gathered together and made that region thicker, because carbon atoms were excited by light beam. Another technique called plasma clean was introduced to get rid of the noise, which can eliminate carbon atoms by chemical reaction. But it raises up another problem. P3HT consists of carbon, which may also react while cleaning. Even though this inference wasn’t examined, an alternative approach was suggested by advisor to increase the accuracy, which is heat-treatment under vacuum. But appropriate operation method is still under investigation. For the future goals, it’s imperative to either prove that plasma clean doesn’t damage the P3HT sample or find an alternative treating method. With this problem solved, the team will move on to make samples under different conditions, and the structures and properties will be compared with the ones of standard sample. Temporarily, three main factors interested the team most is the RPM, concentration and heat-treatment temperature. Basically, one factor will be changed with all other factors the same as standard, so that the effect of each factor can be studied solely. And the final conclusion about the correlation between structure and electronic properties can be drawn.