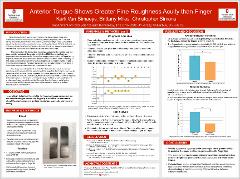 While the system for texture perception on the dermis has been well researched, there is not much information about texture perception on oral surfaces. This study seeks to understand how these two systems may compare. We chose to focus on lingual roughness sensitivity. In order to compare fine scale roughness perception on the anterior tongue versus on the fingertip, we used a simple discrimination task. We hypothesized that the tongue would be better at detecting roughness since this ability plays a vital role in chewing, swallowing and speech. We had different metal coupons mechanically roughened to different levels from 0.10 to 0.44 micrometers. The experiment was divided into two parts in which they would assess two of the metal stimuli and tell us which one they perceived as rougher. They were presented with two stimuli and asked to lick them in a circular motion with the anterior one third of their tongue. The process was repeated with their fingertip. The detection threshold was the mean of eight reversals along the ladder. The detection threshold was found to be 0.216 ± 0.004 µm for the tongue and 0.289 ± 0.018 µm for the finger. This difference was significant (p<0.001). Additionally, binomial statistics conclude that a significant majority of people are more accurate with their tongue than with their fingers (p = .021). This supports our hypothesis and confirms that the tongue has a greater ability to perceive fine scale roughness. In the future we will be investigating tactile sensitivities of the mouth by using different stimuli and different surfaces of the mouth. This will help us build a better picture of the mechanisms of texture perception of oral tissues.