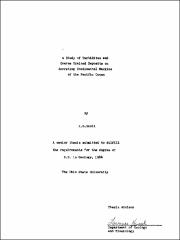 Underwood and Karig (1980) have proposed a model which uses the processes of upslope ponding and submarine bypassing to explain the lack of coarse grained debris on the lower slope of the continental rise system. The purpose of this report was to test this model using sediment data from accreting margins in the Pacific Ocean. In addition, attempts were made to correlate similarities in the mode of deposition, location, frequency and age of turbidites in the Pacific Trench systems. Cores from 21 Deep Sea Drilling Project (D.S.D.P.) sites were used for comparison in this study. These cores were recovered during Legs 18-19, 31, 56-57 and 66-67. Because of poor recovery, absence of coarse grained debris, undesirable location on the slope and absence of turbidites, 13 of the holes were found to be note useful for this study and were disregarded. Although several examples of upslope ponding and submarine bypassing were exhibited on the Japan and Mid American Trenches, it was concluded that more extensive studies must be made before the accuracy of Karig and Underwood's model (1980) can be assessed. This study was unable to find any large scale correlations between mode and time of deposition of turbidite structures. Again, more data is required before any conclusion can be made as to whether or not turbidites were deposited in a similar manner.