An expanded definition of shoals along the Middle Atlantic Bight, North America 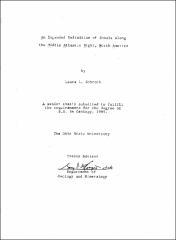 Shoals along the Middle Atlantic Bight are divided into two major groups, linear shoals and arcuate shoals. Linear shoals include shoreface-connected shoals and isolated shoals. Arcuate shoals are either cape-associated or inlet associated. Excellent examples of linear and cape-associated shoals are found off of the coast of North Carolina. Three hypotheses for the origin of shoals are presented. All are based on a rise in sea level and the subsequent shoreface retreat. Modern hydraulics, in the form of waves and currents, appear to influence the formation of shoals.