X-ray analysis of the clay minerals of the Morrison(?), Twist Gulch and Arapien formations of central Utah 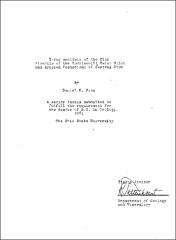 Thirteen samples of siltstones, clays, and shales, one from the Arapien Shale, eight from the Morrison(?) Formation, and four from the Twist Gulch Formation of the Jurassic System of central Utah were collected during the summer of 1982. Both whole rock and clay fractions of each sample were X-rayed. The clay fractions were X-rayed twice; air-dried and after salvation in ethylene glycol. This was done in order to determine the major clay and non-clay mineral constituents. All samples contained quartz. Many also contained calcite, dolomite, and feldspars. Kaolinite was present in most samples. Two Morrison(?) samples exhibited very intense smectite peaks which may indicate a volcanic origin. Both Twist Gulch and Morrison(?) samples contained mixed layer clays (smectite-illite). Thus clay mineral content can not be used to distinguish these formations. The heavy mineral fraction of two Morrison(?) samples was examined microscopically. One sample contained dolomite, hematite, anatite, and zircon. In the second sample hematite, magnetite, leucoxene, zircon, apatite, and tourmaline were identified. The heavy mineral suite did not indicate an exclusively volcanic origin for the latter sample, although other evidence suggested such a possibility.