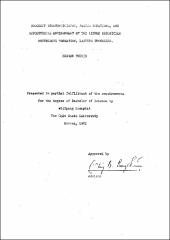 With the establishment of a conodont biostratigraphic framework by Bergström (1971) for the lower Middle Ordovician, the Whitesburg Formation of eastern Tennessee was dated reliably for the first time. It occupies an interval from low in the Pygodus serra Zone to the Upper Subzone of the P. anserinus Zone. This corresponds to the middle of the Didymograptus murchisoni through the lower Nemagraptus gracilis graptolite zones. (See figure 1b). Thus, the upper range of the Whitesburg is younger than has been previously reported (Bergström, 1973). Stratigraphic, lithic, and faunal evidence previously reported indicates that the Whitesburg is the result of slope or shelf margin deposition. Bergström and Carnes(1976) have established that the distribution of various conodont genera and species can be used to evaluate the environment of deposition in which they occur. Conodonts collected by the author from the upper Whitesburg suggests a combination of genera and species from 2 different environmental regimes. Prioniodus elements, typical of the shallow water Belodella-Phragmodus-Prioniodus RSA (Recurrent Species Associations) along with deep water Pyrodus are numerically dominant. This, along with other evidence, is indicative of a shelf margin environment in which turbidity currents may have brought material down the slope from the carbonate shelf to the northwest.