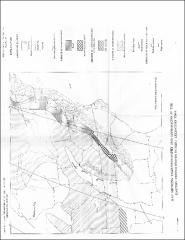 A paleomagnetic study was conducted involving an eighty foot section from a twelve hundred foot drill core (7OZA) of Middle Ordovician age sediments from Minerva, Kentucky. The study was initiated to (a) confirm or reject the presence of magnetite and (b) to support or refute a hypothesis of Patzwahl (1981) concerning the abnormal paleomagnetic inclinations he obtained near the base of the Lexington Limestone. Patzvahl speculated that post depositional chemical remanent magnetization (CBM) has altered the original Ordovician depositional remanent magnetization (DRM) to a Tertiary or Recent orientation. The bentonite beds present could act as an aquaclude which would favor the oxidation of the iron minerals present to hematite. A procedure, following Richardson (1983), was set up to determine the magnetic minerals present using saturation isothermal remanent magnetization techniques (SIRM). This process progressively aligns the individual magnetic domains within the magnetic mineral grains until they reach their characteristic saturation intensity. The saturation intensity is usually diagnostic of the magnetic minerals present in the sample, particularly in regard to magnetite and hematite. Also an attempt has been made to correlate the bentonite beds present in this section of drill core 7OZA.