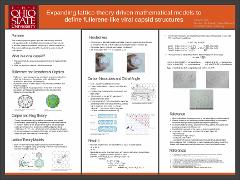 Many viral protein shells, called capsids, have an icosahedral structure which can be geometrically modeled by the Caspar and Klug theory. The arrangement of the capsid protein subunits are also described through this theory by the concepts of triangulation (T) number and quasi-equivalence. Lattice theory models build on these ideas to represent fullerene-like capsids using generating vectors, which are characterized by the T-number and constructed on a hexagonal lattice. This research project expands upon the model by establishing determinants and requirements to account for complexities which have been oversimplified, such as left/right handedness occurring in many viral capsids. It also analyzes the relationship between the hexagonal lattice and its triangular dual. Previous models have used the dual to represent viral capsid structures; an assumed equivalence that is not proven. The findings are then being used to characterize models representing these features. The results refine the lattice theory model and advance our current understanding of viral capsids by defining their specificity. They also increase the ability to predict and determine the structures and the arrangement of their proteins. This may then fuel further research in similar areas of study.