Manga at a Crossroads: Classic Manga, Development and Globalization of Manga 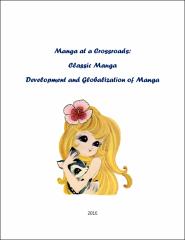 Proceedings from two symposia held at Ohio State University in Spring of 2015, titled "Manga at a Crossroads." The first symposium, held on March 6th, was on the theme of classic manga. The second, held on April 4th, was on the development and globalization of manga. The symposia were held in honor of Prof. Maureen Donovan, who retired from the Ohio State University Libraries in 2015.

Individual authors retain copyright to their work. Copyright for the collection belongs to The Ohio State University. Permission to reuse, publish, or reproduce beyond the bounds of Fair Use or other exemptions to copyright law must be obtained from the copyright holder.