Latest Cenozoic foraminifera from the 154-0 m interval of the DVDP 8, 9, and 10 drillholes, Taylor Valley, Antarctica 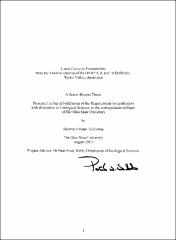 Benthic foraminifera have been examined from the upper 154 meters of a 186 m thick Pliocene-Holocene glacial succession recovered in the DVDP 8, 9, and 10 drillholes of eastern Taylor Valley, Transantarctic Mountains, Antarctica. The principal objectives of the investigation center on resolving the stratigraphic position of the Pliocene-Pleistocene boundary, establishing the full extent of the Pleistocene succession, and evaluating the potential value of these sediments for refining latest Cenozoic chronostratigraphy. The upper 154 meters of the succession were subdivided into twenty-four lithostratigraphic subunits by McKelvey (1981). Subunits are expressions of discrete lithofacies packages such as diamictite, conglomerate, breccia, sands, and mudstone. A well-defined disconfonnity at a drillhole depth of ~154 m (disconformity H3) separates the mid-Pliocene sediments below from the younger succession above. The latter is investigated here. Numerous disconformities of unknown duration, probably produced during repeated phases of glacier and ice sheet advance and grounding, occur within the younger succession. They also appear to be associated with repeated phases of erosion and re-transportation of sediments and their in situ fossil material. This upper sedimentary succession provides, therefore, only a partial and reprinted geological record. In situ benthic foraminiferal assemblages have been documented within the eastern Taylor Paleofjord at its juncture with the western margins of McMurdo Sound and the southwestern Ross Sea at ~140 m, ~125m, ~99-90 m, and 25-0 m. The assemblages are interpreted as being deposited during marine deglacial events, such as receding tidewater glaciers, ice shelves, and possibly open marine waters with icebergs. Assemblage content in the lower three of the four intervals cited above is identical to assemblages in the Holocene (4-5 kyr bp) sediments between 25-0 min DVDP 8, 9, and 10, mid Pleistocene (~1 Ma) assemblages in the CRP-1 drillhole on submarine Roberts Ridge (western McMurdo Sound), and living assemblages in New Harbor and other coastal regions of McMurdo Sound. All four DVDP drillhole foraminiferal assemblages identified above are significantly different from the Pliocene and late Miocene assemblages that occur below the H3 disconformity in both the DVDP 10 and 11 drillholes of Taylor Valley (Taylor Paleofjord). This implies that the succession above ~140 m, and perhaps that above H3 at ~154 m, are Pleistocene-Holocene in age. Published magnetostratigraphic data has been interpreted so as to date the upper 154 m of DVDP 10 as part of the Gauss (<3 Ma, late Pliocene), as well as the Matuyama (late Pliocene-Pleistocene), and Brunhes (Pleistocene-Holocene) polarity zones; with the Pliocene-Pleistocene boundary placed at a drillhole depth of ~71 m. Pliocene diatoms and Pliocene- recent silicoflagellates and radiolarians have been reported from the DVDP 154-0 m interval and would appear to support age determinations derived from magnetostratigraphical data. Benthic foraminifera data presented in this study do not support this chronostratigraphical interpretation. Pliocene benthic foraminifera also occur in the DVDP 154-0 m interval and in some instances co-occur with apparent PleistoceneHolocene foraminiferal assemblages discussed herein. This is ample evidence to support mixing among fossil assemblages above 154 m. It follows that Pliocene and possibly upper Miocene sediments and their fossil contents were eroded from older successions during the cutting of the H3 disconformity. This process is most adequately explained by grounded glacier ice or ice shelves transporting the sediments and microfossils into the Pleistocene-Holocene sediments during their re-deposition. This hypothesis gains support from the fact that Holocene and Pleistocene sediments across the floor of the Ross Sea also contain abundant and identical recycled Pliocene and Miocene fossil material. Because recycled volcanic material of the McMurdo Group (upper Miocene to modem) is distributed throughout the 154-0 m interval, 40 Ar/39 Ar radiometric dating of clasts might provide an independent method by which to test the validity of the magnetostratigraphical data. Radiometric dating would also assist in identifying those parts of the upper succession that are younger than the Pliocene-Pleistocene boundary (i.e., <~1.8 Ma).