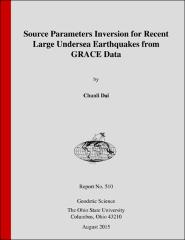 The north component of gravity and gravity gradient changes from the Gravity Recovery And Climate Experiment (GRACE) are used to study the coseismic gravity change for five earthquakes over the last decade: the 2004 Sumatra-Andaman earthquake, the 2007 Bengkulu earthquake, the 2010 Maule, Chile earthquake, the 2011 Tohoku earthquake, and the 2012 Indian Ocean earthquakes. We demonstrate the advantage of these north components to reduce north-south stripes and preserve higher spatial resolution signal in GRACE Level 2 (L2) monthly Stokes Coefficients data products. By using the high spherical harmonic degree (up to degree 96) data products and the innovative GRACE data processing approach developed in this study, the retrieved gravity change is up to – 34±1.4 μGal for the 2004 Sumatra and 2005 Nias earthquakes, which is by far the highest coseismic signal retrieved among published studies. Our study reveals the detectability of earthquakes as small as Mw 8.5 (i.e., the 2007 Bengkulu earthquake) from GRACE data. The localized spectral analysis is applied as an efficient method to determine the practical spherical harmonic truncation degree leading to acceptable signal-to-noise ratio, and to evaluate the noise level for each component of gravity and gravity gradient change of the seismic deformations. By establishing the linear algorithm of gravity and gravity gradient change with respect to the double-couple moment tensor, the point source parameters are estimated through the least squares adjustment combined with the simulated annealing algorithm. The GRACE-inverted source parameters generally agree well with the slip models estimated using other data sets, including seismic, GPS, or combined data. For the 2004 Sumatra- Andaman and 2005 Nias earthquakes, GRACE data produce a shallower centroid depth (9.1 km) compared to the depth (28.3 km) from GPS data, which may be explained by the closer-to-trench centroid location and by the aseismic slip over the shallow region. For the 2011 Tohoku earthquake, the inversions from two different GRACE data products and two different forward modeling produce similar source characteristics, with the centroid location southwest of and the slip azimuth 10° larger than the GPS/seismic solutions. The GRACE-estimated dip angles are larger than that from GPS/seismic data for the 2004 Sumatra-Andaman and 2005 Nias earthquakes, the 2010 Maule, Chile earthquake, and the 2007 Bengkulu earthquake. These differences potentially show the additional offshore constraint from GRACE data, compared to GPS/seismic data. With more accurate and higher spatial resolution measurements anticipated from the GRACE Follow-on mission, with a scheduled launch date in 2017, we anticipate the data will be sensitive to even smaller earthquake signals. Therefore, GRACE type observations will hopefully become a more viable measurement to further constrain earthquake focal mechanisms.

This Report was prepared for and submitted to the Graduate School of the Ohio State University as a dissertation in partial fulfillment of the requirements for the PhD degree.
This research is conducted under the supervision of Professor C.K. Shum, Division of Geodetic Science, School of Earth Sciences, The Ohio State University. This research is primarily supported by NASA’s Earth and Space Science Fellowship (ESSF) Program (Grant NNX12AO06H), partially supported by National Science Foundation (NSF) Division of Earth Sciences (Grant EAR-1013333). GRACE data products are from NASA’s PODAAC via Jet Propulsion Laboratory/California Institute of Technology (JPL), University of Texas Center for Space Research (CSR), and GeoForschungsZentrum Potsdam (GFZ). Preliminary GPS time series provided by the ARIA team at JPL and Caltech. All original GEONET RINEX data were provided to California Institute of Technology by the Geospatial Information Authority (GSI) of Japan. Some figures in this paper were generated using the Generic Mapping Tools (GMT) [Wessel and Smith, 1991]. This work was also supported in part by an allocation of computing resources from the Ohio Supercomputer Center (http://www.osc.edu).