Heights, the Geopotential, and Vertical Datums 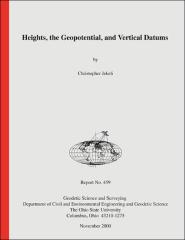 This report reviews the fundamental definitions of heights and vertical datums, specifically motivated by the modern technique of determining heights using accurate satellite vertical positioning in combination with an accurate model for the geopotential. It is shown that the determination of heights in such a manner requires knowledge of the potential value of the vertical datum (as opposed to leveling procedures that do not require this). Furthermore, to determine the potential of a vertical datum ideally requires normal heights (defined at the origin point of the datum, or determined elsewhere by leveling) rather than orthometric heights, as this avoids the complication of assuming a density model for the crust. The models associated with these procedures are also developed within the context of the temporally varying field of the tidal potential, which leads to a more fundamental distinction between a vertical datum (local geoid) and the global geoid. That is, the global geoid, by definition, has always the same potential value but its surface varies (varying geoid undulation); while the vertical datum has an origin changing only because of crustal deformation and the potential varies due to the direct and indirect tidal effects. The models thus developed also form the basis for monitoring the stability of vertical datums under the influence of geodynamic vertical crustal deformations, such as caused by post-glacial rebound. This has obvious implications in the monitoring of lake levels that are tied to a particular vertical datum. Preliminary models and procedures are indicated.