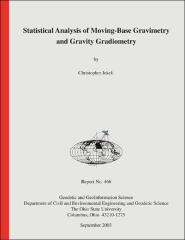 Moving-base gravimetry systems require multiple sensors to extract the gravitational signal – an accelerometer (or gravimeter), or a set of mutually orthogonal accelerometers that sense the action forces on the vehicle; a suite of gyroscopes (or a stabilized platform) that provides proper orientation for the accelerometers; and a geometric (kinematic) positioning system (e.g., GPS) from which the kinematic acceleration may be derived, and that also provides geospatial referencing of the signals. The error in the recovered gravitational signal depends on the individual sensor errors, but also on the coupling of the sensor errors to the actual acceleration environment of the system. The error analysis is fairly well known and documented in the literature and agrees largely with experimental and operational results. This report reviews the analysis in detail and extends it to moving-base gravity gradiometry. In the latter case the system comprises a set of gradiometers (or differential accelerometers), a suite of gyros for orientation (stabilization), and a geospatial referencing system (GPS). The errors in the recovered gravitational gradients depend on the sensor errors, but also on the coupling of these errors to the angular rate environment of the system. The analyses specifically target airborne systems used for gravity and gravity gradient mapping. While the orientation bias error is especially detrimental to airborne gravimetry, it is the random noise in the gyro angular rate that contributes most to airborne gradiometry, as it couples with the total angular rate. The analysis shows that a gradiometer with 1 E/ √Hz sensitivity will not be adversely compromised (at medium and high frequencies) if the required gyros have bias repeatability of 0.0015 °/hr and sensitivity of 0.01 °/hr/ √Hz ≈ 0 .00015 °/ √hr , and if the orientation bias is 0.06 °. The latter numbers all reflect an order of magnitude lower than commensurate gradient error effects of 1 E/ √Hz . This report also provides detailed models for the various error sources, as well as for the accelerations and angular rates of the aircraft and for the gravitational signal to wavelengths as short as 1 m.