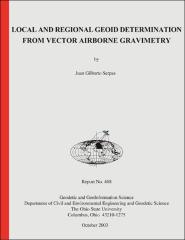 The local geoid in a test area in the Canadian Rocky Mountains is computed using airborne gravimetry data. The geoid is computed by the use of the vertical and horizontal components (VC and HC) of the gravity disturbance vector. In addition, an attempt to combine the three components by the use of least squares collocation is done. The technique of using crossovers to estimate for biases and trends in the gravity signals and the use of minimal control in the form of constraints in the crossover adjustment are studied. Moreover, the downward continuation as well as the direct and indirect effects due to removal and restoration of the masses are investigated. An expression for the effect of the masses applied directly to disturbing potential is provided. Comparison of the predicted components of the gravity disturbing vector with control data indicates that the vertical component is better determined than the horizontal component. The estimated accuracy for the vertical components is on the order of 4 mGal, whereas for the horizontal components it is on the order of 8 to 12 mGal. Both geoid estimates coming from the vertical and horizontal components of the gravity disturbance vector, computed using Hotine s and line integral, show the same level of accuracy when compared to the Canadian geoid. Relative geoid accuracies on the order of 3 to 7 cm for the VC geoid, and on the order of 4 to 12 cm for the HC geoid are achieved. The VC geoid suffers from edge effects on the results, while the HC geoid is highly dependent on ground control. In order to alleviate the use of full ground control for the HC geoid, the computation of the geoid at two crossing tracks is explored. Regarding the estimation of the geoid using least squares collocation to combine the three components of the gravity disturbance vector (3C-LSC), we observe differences in the range of 4 to 6 cm, without including edge effects, with respect to the Canadian geoid. Comparing the 3C-LSC results with those from the VC geoid using Hotine s integral, the 3C-LSC are comparable and improved for some lines, in terms of standard deviation. In general the result from the 3C-LSC are better than those from HC, by line integral. On the other hand, the use of only the vertical component by least squares collocation (VC-LSC) provides, in general, better results than those from 3C-LSC, and those from the VC and HC by the use of Hotine s and line integral. We could expect better results for the case of 3C-LSC if we are able to improve the quality of the measured horizontal components of the gravity disturbance vector. The application of a wave correlation filter to both HC and VC component geoid is also explored, and promising results for the improvement of the accuracy of the combined geoid are observed.

This report was prepared by Juan Gilberto Serpas, a graduate student, Department of Civil and Environmental Engineering and Geodetic Science, under the supervision of Professor Christopher Jekeli.
This research was supported under a contract with the National Imagery and Mapping Agency (NIMA). Contract no. NMA202-98-1-1110.
This report was also submitted to the Graduate School of The Ohio State University as a thesis in partial fulfillment of the requirements for the degree Doctor of Philosophy.