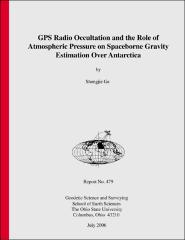 Dedicated satellite gravity missions are anticipated to significantly improve the current knowledge of the Earth’s mean gravity field and its time variable part–climate sensitive gravity signals. They could be measured by the Gravity Recovery and Climate Experiment (GRACE) twin-satellite with sub-centimeter accuracy in terms of column of water movement near the Earth’s surface with a spatial resolution of several hundred kilometers or larger, and a temporal resolution of one month or weeks. To properly recover the time variable gravity signals from space, the gravity measurements require the atmospheric pressure contribution to be accurately modeled and removed. The sparse coverage of measurements makes the weather products less accurate in the southern hemisphere, especially over the Southern Ocean and Antarctica. The asynoptic observation from GPS radio occultation could achieve dense spatial coverage even in remote regions. In this research, we investigate the potential use of GPS occultation to improve the pressure modeling over Antarctica. Atmospheric pressure profiles are retrieved and validated against ECMWF, NCEP and radiosonde observations. Our results show that occultation can provide compatible observations especially in the upper atmosphere. Large standard deviations and biases are found near the ground and in the Antarctic region. GPS occultation in the polar regions is less affected by multipath problem and can penetrate down near the surface. Through an experiment using a 1-D variational (1DVar) approach, we show that the high vertical accuracy of GPS occultation can be propagated down to reduce the uncertainty of surface pressure, indicating that GPS occultation can be expected to have positive impact on the pressure modeling over data-sparse areas after obtaining adequate number of observations (e.g., from Constellation Observing System for Meteorology, Ionosphere & Climate (COSMIC)). We also find that the retrieved profiles could be different due to various assumptions and retrieval algorithms. Pressure uncertainty degrades the GRACE recovered gravity change. We study the uncertainty of pressure modeling on various temporal scales. Global analysis models show large differences in the Antarctic region. The surface topography may introduce additional biases if it is not well treated. The atmospheric tides are non-negligible and need to be properly considered. The real magnitude of the mismodeled and un-modeled errors in the analysis is hard to evaluate, especially in Antarctica. We simulate the errors sensitive to GRACE using the differences between two global analysis models. Most of the very long wavelength errors are well ii captured by GRACE. Their changes in the form of short-period variation increase the errors of the middle to high degree spherical harmonic coefficients. After de-aliasing, middle to high degree coefficients are noticeably improved. The Inverted Barometer (IB) assumption decreases the amplitude of the aliasing error, and the pattern of the RMS difference is slightly changed over land by neglecting the large variations in the Southern Ocean. Our result using more recent ECMWF and NCEP operational analyses shows reduced aliasing effects, which indicates that two models are becoming increasingly close to each other. The model correlation and IB assumption may underestimate the true aliasing error. The analysis models are validated against the unevenly distributed Automatic Weather Station (AWS) surface pressure observations on the Antarctic continent. Spectral analysis shows that 6-hour analyzed model data can capture most of the power in pressure variations. ECMWF exhibits a much better agreement with AWS than NCEP reanalysis does. Large biases still exist due to the uncertainties of the station elevations. The comparison statistics show strong correlations with the topography with lower standard deviation values in the interior and higher standard deviation values around the coastal area. This result contradicts the distribution derived from the difference between two analysis models, which exhibits large difference in the interior of Antarctica. We also investigate the influences of different algorithms and assumptions of 2- D or 3-D atmospheric structures on the GRACE atmospheric de-aliasing product. Air density derived from the hydrostatic equation and the equation of state gives slightly different results, and the difference is above the expected GRACE sensitivity. We compare our results with the GRACE atmospheric de-aliasing product and find that the difference is almost below the GRACE sensitivity, although there are differences in the algorithms and we use a relatively low resolution model. We also find that the difference between 3-D hydrostatic formulation and 2-D algorithm is below the GRACE sensitivity. We discover that the atmospheric structure and latitudinal variations of gravity are largely compensated by removing their respective long-term means. Consequently, the 2-D method can greatly reduce the requirements for computational load and data storage. Removing the mean field does not help to reduce the discrepancies between ECMWF and NCEP. If the computational burden is not a concern, using our improved 3-D algorithm can bring a better result. After the full operation of the COSMIC satellites, some major improvement of the pressure modeling over Antarctica is anticipated. A reprocessing of the GRACE data using an improved pressure model could bring us better gravity solutions.

This report was prepared by Shengjie Ge, a graduate research associate in the Geodetic Science and surveying program of the Department of Geological Science at the Ohio State University, under the supervision of Professor C. K. Shum.
This study was partially supported by grants from NASA Interdisciplinary Science Program NAG5-9518, and National Science National Space Weather Program ATM- 0418844.
This report was also submitted to the Graduate School of the Ohio State University as a dissertation in partial fulfillment of the requirements for the Ph.D. degree.