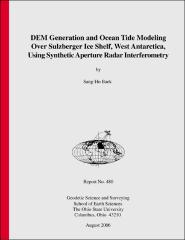 The use of Synthetic Aperture Radar Interferometry (InSAR) is an effective tool for studying the ice mass balance of polar regions and its contribution to global sea level change. An accurate, high-resolution digital elevation model (DEM) referenced within a well-defined terrestrial reference frame (TRF) is an inherent requirement to facilitate the use of InSAR to conduct these studies in remote polar regions where ground control points (GCPs) are unavailable. In this study, a digital elevation model by the Sulzberger Bay, West Antarctica is determined by using twelve European Remote Sensing (ERS) -1 and ERS-2 tandem satellite mission synthetic aperture radar scenes and nineteen Ice, Cloud, and land Elevation Satellite (ICESat) laser altimetry profiles. Differential interferograms from the ERS-1/ERS-2 tandem mission SAR scenes acquired in the austral fall of 1996 are used together with four selected ICESat laser altimetry profiles in the austral fall of 2004 which provides GCPs, resulting in an improved geocentric 60-m resolution DEM over the grounded ice region. The InSAR DEM is then extended to include two ice tongues using ICESat profiles via Kriging. Fourteen additional ICESat profiles acquired in 2003-2004 are used to assess the accuracy of the DEM. After accounting for radar penetration depth and predicted surface changes, including effects due to ice mass balance, solid Earth tides, and glacial isostatic adjustment, in part to account for the eight-year data acquisition discrepancy, the resulting difference between the DEM and ICESat profiles is -0.55 ± 5.46 m. After removing the discrepancy between the DEM and ICESat profiles for a final combined DEM using a bicubic spline, the overall difference is 0.05 ± 1.35 m indicating excellent consistency. Accurate knowledge of the Antarctic ice sheet mass balance plays an important role on the global sea level change. Ocean tides (barotropic and baroclinic) and tidal currents cause basal melting and migration of grounding lines, which are all critical to the accurate determination of ice sheet or ice stream mass balance. Ocean tides in the Antarctic Ocean, especially underneath ice shelves or sea ice, are poorly known primarily due to lack of observations with adequate resolution and knowledge of the bathymetry and ice shelf bottom roughness. InSAR has been used to measure the ice sheet mass iii balance, ice topography, ice stream velocity, and the location of the grounding lines. To properly use InSAR measurements for ice mass balance and because of their high spatial resolution (tens of meters), knowledge of ocean tides underneath the ice shelves needs to be accurately known and with commensurate resolution. Here two-pass differential InSAR (DInSAR) technique is applied for tidal signal modeling underneath the Sulzberger ice shelf, West Antarctica. The fine resolution (60-m) Digital Elevation Model (DEM) over grounded ice and ice shelf, obtained by combining ERS-1/2 tandem InSAR and ICESat laser altimetry, has been used to correct the topography phase from interferograms, resulting in a more accurate time series of vertical deformation measurements. In this study, it is demonstrated for the first time, that observable tidal constituents can be estimated underneath an ice shelf using an InSAR time series. In particular, it is shown that the time series of observed tidal differences from InSAR agrees well with a number of global/regional ocean tide models such as NAO.99b, TPXO.6.2, GOT00.2, CATS02.01, and FES2004, with the regional model, CATS02.01, having the best agreement. The technique developed here can be applied to other ice shelf regions where tide modeling is poor in accuracy and resolution.

This research is supported by a grant from the National Science Foundation’s Office of Polar Program (OPP-0088029).