Geodesy in Antarctica: A Pilot Study Based on the TAMDEF GPS Network, Victoria Land, Antarctica 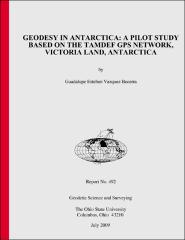 The objective of the research presented in this report is a combination of practical and theoretical problems to investigate unique aspects of GPS (Global Positioning System) geodesy in Antarctica. This is derived from a complete analysis of a GPS network called TAMDEF (Trans Antarctic Mountains Deformation), located in Victoria Land, Antarctica. In order to permit access to the International Terrestrial Reference Frame (ITRF), the McMurdo (MCM4) IGS (The International GNSS Service for Geodynamics, formerly the International GPS Service) site was adopted as part of the TAMDEF network. The following scientific achievements obtained from the cited analysis will be discussed as follows: (1) The GPS data processing for the TAMDEF network relied on the PAGES (Program for Adjustment of GPS Ephemerides) software that uses the double-differenced iono-free linear combination, which helps removing partial of bias (mm level) in the final positioning. (2) To validate the use of different antenna types in TAMDEF, an antenna testing experiment was conducted using the National Geodetic Survey (NGS) antenna calibration data, appropriate for each antenna type. Sub-daily and daily results from the antenna testing are at the sub-millimeter level, based on the fact that 24-hour solutions were used to average any possible bias. (3) A potential contributor that might have an impact on the TAMDEF stations positioning is the pseudorange multipath effect; thus, the root mean squared variations were estimated and analyzed in order to identify the most and least affected sites. MCM4 was found to be the site with highest multipath, and this is not good at all, since MCM4 is the primary ITRF access point for this part of Antarctica. Additionally, results from the pseudorange multipath can be used for further data cleaning to improve positioning results. (4) The Ocean Tide Modeling relied on the use of two models: CATS02.01 (Circum Antarctic Tidal Simulation) and TPXO6.2 (TOPEX/Poseidon) to investigate which model suits the Antarctic conditions best and its effect on the vertical coordinate component at the TAMDEF sites. (5) The scatter for the time-series results of the coordinate components for the TAMDEF sites are smaller when processed with respect to the Antarctic tectonic plate (Case I), in comparison with the other tectonic plates outside Antarctica (Case II-IV). Also, the seasonal effect due to the time-series seen in the TAMDEF sites with longer data span are site dependent; thus, data processing is not the reason for these effects. (6) Furthermore, the results coming from a homogeneous global network with coordinates referred and transformed to the ITRF2000 at epoch 2005.5 reflect the quality of the solution, obtained when processing TAMDEF network data with respect to the Antarctic tectonic plate. (7) An optimal data reduction strategy was developed, based on three different troposphere models and mapping functions, tested and used to estimate the total wet zenith delay (TWZD) which later was transformed to precipitable water vapor (PWV). PWV was estimated from GPS measurements and validated with a numerical weather model, AMPS (Antarctic Mesoscale Prediction System) and radiosonde PWV. Additionally, to validate the TWZD estimates at the MCM4 site before their conversion into the GPS PWV, these estimates were directly compared to TWZD computed by the CDDIS (Crustal Dynamics Data Information System) analysis center. (8) The results from the Least-Squares ii adjustment with Stochastic Constraints (SCLESS) as performed with PAGES are very comparable (mm-level) to those obtained from the alternative adjustment approaches: MINOLESS (Minimum-Norm Least-Squares adjustment); Partial-MINOLESS (Partial Minimum-Norm Least-Squares adjustment), and BLIMPBE (Best Linear Minimum Partial-Bias Estimation). Based on the applied network adjustment models within the Antarctic tectonic plate (Case I), it can be demonstrated that the GPS data used are clean of bias after proper care has been taken of ionosphere, troposphere, multipath, and some other sources that affect GPS positioning. Overall, it can be concluded that no suspected of bias was present in the obtained results, thus, GPS is indeed capable of capturing the signal which can be used for further geophysical interpretation within Antarctica.

This report was prepared by Guadalupe Esteban Vázquez Becerra, a graduate student, Department of Civil and Environmental Engineering and Geodetic Science, under the supervision of Professor Dorota A. Grejner Brzezinska and Burkhard Schaffrin.
This research was supported by the National Council for Science and Technology (CONACYT) and partially supported by a grant from the National Science Foundation.
This report was also submitted to the Graduate School of The Ohio State University as a thesis in partial fulfillment of the requirements for the degree Doctor of Philosophy.