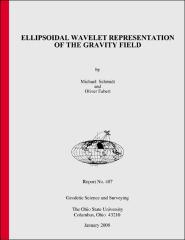 The determination and the representation of the gravity field of the Earth are some of the most important topics of physical geodesy. Traditionally in satellite gravity recovery problems the global gravity field of the Earth is modeled as a series expansion in terms of spherical harmonics. Since the Earth’s gravity field shows heterogeneous structures over the globe, a multi-resolution representation is an appropriate candidate for an alternative spatial modeling. In the last years several approaches were pursued to generate a multi-resolution representation of the geopotential by means of spherical base functions. Spherical harmonics are mostly used in global geodetic applications, because they are simple and the surface of Earth is nearly a sphere. However, an ellipsoid of rotation, i.e., a spheroid, means a better approximation of the Earth’s shape. Consequently, ellipsoidal harmonics are more appropriate than spherical harmonics to model the gravity field of the Earth. However, the computation of the coefficients of a series expansion for the geopotential in terms of both, spherical or ellipsoidal harmonics, requires preferably homogeneous distributed global data sets. Gravity field modeling in terms of spherical (radial) base functions has long been proposed as an alternative to the classical spherical harmonic expansion and is nowadays successfully used in regional or local applications. Applying scaling and wavelet functions as spherical base functions a multi-resolution representation can be established. Scaling and wavelet functions are characterized by the ability to localize both in the spatial and in the frequency domain. Thus, regional or even local structures of the gravity field can be modeled by means of an appropriate wavelet expansion. To be more specific, the application of the wavelet transform allows the decomposition of a given data set into a certain number of frequency-dependent detail signals. As mentioned before the spheroid means a better approximation of the Earth than a sphere. Consequently, we treat in this report the ellipsoidal wavelet theory to model the Earth’s geopotential. Modern satellite gravity missions such as the Gravity Recovery And Climate Experiment (GRACE) allow the determination of spatio-temporal, i.e., four-dimensional gravity fields. This issue is of great importance in the context of observing time-variable phenomena, especially for monitoring the climate change. Global spatio-temporal gravity fields are usually computed for fixed time intervals such as one month or ten days. In the last part of this report we outline regional spatio-temporal ellipsoidal modeling. To be more specific, we represent the time-dependent part of our ellipsoidal (spatial) wavelet model by series expansions in terms of one-dimensional B-spline functions. Thus, our concept allows to establish a four-dimensional multi-resolution representation of the gravity field by applying the tensor product technique

The research which led to this report was initiated during a visit to the Ohio State University (OSU) from February 2002 through January 2003, and partially supported by grants from the National Geospatial-Intelligence Agency's (NGA's) University Research Initiative (NURI), entitled 'Application of spherical wavelets to the solution of the terrestrial gravity field model' (NMA201-00-1-2006, 2000-2005, PIs: C. Shum), and from the National Science Foundation's Collaboration in Mathematics and Geosciences (CMG) Program, entitled 'Multi-resolution inversion of tectonically driven spatio-temporal gravity signals using wavelets and satellite data' (EAR-0327633, 2003-2007, PIs: C.K. Shum). The authors benefited very much from discussions with many researchers at the OSU and thank C.K. Shum and the OSU for hospitality. Further thanks go to the German Geodetic Research Institute (DGFI) and the University of Munich (LMU), at which parts of the work were conducted. Finally we thank Erik W. Grafarend for many fruitful discussions, which were the actual starting point for this project.