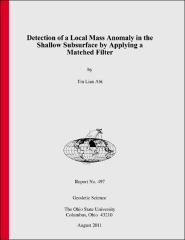 The task is to locate a mass anomaly, particularly a void, in the near subsurface based on gravity, gravity gradients, and magnetic field data. The motivation for this search rises from multiple areas of applications such as urban planning, mining, archeology, and extraterrestrial science. Assuming that the signal generated by the sought mass anomaly is approximately known and can be described by the signal of a three-dimensional prism, a Matched Filter (MF) is implemented to detect this signal buried in the relatively strong noise of the geologic background. The background noise is described in the filter function by covariances. One important aspect of the current study is, therefore, to derive the covariance matrix that accounts for the relation between gravity, gravity gradients, and the magnetic field. It turns out that the choice of covariance function can have a significant influence on the MF performance. The aim of this research is to answer some fundamental questions regarding the various combinations of data types, the estimation of the depth or orientation of the mass anomaly, as well as the optimal number of observed profiles. All tests are carried out by Monte Carlo simulations, which include randomized simulated background fields. In addition, a statistical interpretation based on the Neyman-Pearson hypothesis test is provided. It determines the probabilities that either a sought anomaly is not detected or that some background noise is mistaken for the sought anomaly. The simulation results lead to the conclusion that the MF is a very strong tool to detect the sought anomaly along an observed profile as it searches for the maximum Signal-to-Noise ratio. Therefore, the MF is able to detect anomalies buried in the background noise even if they are not directly visible in the data set. A data set of either gravity gradients or the magnetic field leads to more successful detections compared to a data set of gravity. The combination of several gravity gradient components as well as the magnetic field further improves the fileter performance. The MF is highly sensitive to the depth of the sought anomaly but far less sensitive to its horizontal orientation. As a consequence, it is possible to determine a rough estimate for the depth but not for the orientation, which, however, can be approximated by measuring multiple profiles.

This report was prepared for and submitted to the Graduate School of the Ohio State University as a dissertation in partial fulfillment of the requirements for the PhD degree.