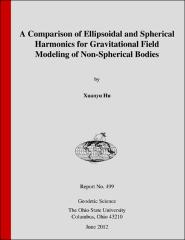 Two harmonic expansions are compared on modeling the gravitational field of non-spherical attracting bodies. As a solution to the Laplace’s equation based on spherical coordinates, the spherical harmonic series (SHS) is uniformly convergent outside a certain reference sphere that encloses the entire body mass. The convergence can be doubtful in close proximity to the body. On the other hand, a tri-axial ellipsoid, being more arbitrary-shaped than a sphere, is more apt to be closely fitting to the attracting body. It would be desirable to apply the ellipsoidal harmonic series (EHS) for field modeling if the body is distinctly non-spherical. To obtain the EHS one solves the Laplace’s equation in ellipsoidal coordinates. In theory, the EHS is akin to the SHS in terms of representation, properties and relation to the field potential problem. It can be shown that EHS is convergent outside a certain reference ellipsoid, thus could have more convergence region than the SHS. However, the application of the EHS for field modeling is obscured by many numerical difficulties. The theoretical formulation is far from practical and needs to be modified at the cost of computational complexity. The numerical scheme of applying the EHS for field modeling presented by Garmier and Barriot has been reviewed and adopted for application in this work. The numerical accuracy of the EHS may deteriorate from a certain degree, e.g., around 15, which limits the use of higher-degree expansions. In simulation we choose to compare the performance of EHS and SHS in modeling the gravitational field of the Martian moon Phobos and asteroid 433 Eros, both assumed to be homogeneous. Of the two bodies, Phobos has moderate shape non-sphericity, while Eros is highly irregular-shaped. Results suggest that the EHS and SHS models are comparable in performance in their respective convergence regions. Outside the convergence region, both models are subject to divergence, i.e., incurring substantial modeling errors. And the further outside the convergence region, the greater the errors. The divergence will be aggravated by increasing the degree of expansions rather than be abated. With smaller convergence region than the EHS, the SHS becomes more vulnerable to divergence in close range of the body, e.g., on the reference ellipsoid. On the other hand, even if the EHS is applied outside its convergence region, e.g., on the surface of the body, it is less error-prone than the SHS, as the surface points usually reside at more shallow depth below the reference ellipsoid than below the reference sphere. The comparison of simulation results on Phobos and Eros suggest that the EHS is a more consistent model than the SHS for the non-spherical bodies, at the expense of increased computational effort. And the more non-spherical the body is, the more advantageous it is to apply the EHS.

This report was presented in partial fulfillment of the requirements for the degree Master of Science in the Graduate School of The Ohio State University.