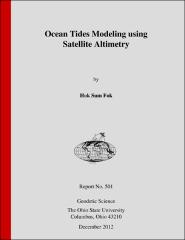 Ocean tides, resulting from the gravitational attractions of the Moon and the Sun, represent 80% of the ocean surface topography variability with a practical importance for commerce and science over hundreds of years. Tides have strong influence on the modeling of coastal or continental shelf circulations, play a significant role in climate due to its complex interactions between ocean, atmosphere, and sea ice, dissipate their energy in the ocean and solid Earth, and decelerate the Moon’s mean motion. Oceanographic studies and applications, including coastal or continental shelf ocean circulations, also require observations to be ‘de-tided’ using ocean tidal forward prediction models before geophysical or oceanographic interpretation, particularly over coastal regions. Advances in satellite radar altimetry technology enabled a globally sampled record of sea surface height (SSH) and its changes over the past two decades, particularly after the launch of TOPEX/POSEIDON satellite. This geophysical record enables numerous scientific studies or discoveries, including improved global ocean tide modeling. Several contemporary ocean tide models have been determined either through the assimilation of satellite altimetry and coastal tide gauge data, often referred to as ‘assimilation models’ (e.g. FES2004, NAO.99b and TPXO6.2/7.1/7.2), or via the use of altimetry observations in an ‘empirical modeling’ approach to solve for tidal constituents based on a-priori tide models, including assimilated models (e.g. DTU10, EOT08a/10a/11a, GOT00.2/4.7). However, ocean tide model accuracy is still much worse, up to an order of magnitude, in the coastal regions or over partially or permanently sea-ice or ice-shelf covered polar ocean, than that of models in the deep ocean. Here observation-based, empirical ocean tide models with 0.25°×0.25° spatial resolution, the OSU12 models, has been determined using improved multi-satellite altimetry data from TOPEX, Jason-1/-2, Envisat, and GFO, and based on a novel approach via spatiotemporal combination, along with a robust estimation technique. We first demonstrate the effectiveness of the spatio-temporal combination approach when comparing with various ocean tide solutions under different data weighting schemes (i.e. equally weighted solution, the weighted solution based on spatial (co-)variances, and the weighted solution based on temporal (co-)variances). The generated tide models show substantial improvement near coastal regions when compared against contemporary ocean tide models using assessment from independent tidal constants of tide gauges and from variance reduction studies using altimetry data. The improvement is particularly apparent in regions with high hydrodynamic variability, yet the model accuracy is still regiondependent. The model is available at: http://geodeticscience.org/oceantides/OSU12v1.0/ For the first time, the potential seasonality of ocean tides in subarctic regions has been demonstrated. A statistically significant difference in variance reduction of multi-mission altimeter SSH anomalies are observed in the subarctic ocean study region during summer iii and winter seasons. The variability in the SSH anomalies during winter are 15–30% larger than those of summer, and we hypothesize that seasonality of tides contributes to the observed SSH variability. The subsequent seasonal ocean tide solutions estimated using observations only in the winter and in the summer seasons, reveal detectable seasonal tidal patterns in the Chukchi Sea near the eastern Siberia region where it is known to have seasonal presence of sea-ice covers.

This report was prepared for and submitted to the Graduate School of the Ohio State University as a dissertation for partial fulfillment of the requirements for the Doctor of Philosophy (PhD) degree.
This research is conducted under the supervision of Professor C.K. Shum, Division of Geodetic Science, School of Earth Sciences, The Ohio State University.
This research is partially supported by grants from NASA’s Physical Oceanography program, including Ocean Surface Topography Science Team Program (JPL 1356532, JPL 1384376, and UC154-5322), and from Ohio State University's Climate, Water, and Carbon (CWC) Program (http://cwc.osu.edu).