Topics in Total Least-Squares Adjustment within the Errors-In-Variables Model: Singular Cofactor Matrices and Prior Information 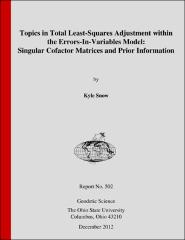 This dissertation is about total least-squares (TLS) adjustments within the errorsin- variables (EIV) model. In particular, it deals with symmetric positive-(semi)definite cofactor matrices that are otherwise quite arbitrary, including the case of crosscorrelation between cofactor matrices for the observation vector and the coefficient matrix and also the case of singular cofactor matrices. The former case has been addressed already in a recent dissertation by Fang [2011], whereas the latter case has not been treated until very recently in a presentation by Schaffrin et al. [2012b], which was developed in conjunction with this dissertation. The second primary contribution of this work is the introduction of prior information on the parameters to the EIV model, thereby resulting in an errors-in-variables with random effects model (EIV-REM) [Snow and Schaffrin, 2012]. The (total) least-squares predictor within this model is herein called weighted total least-squares collocation (WTLSC), which was introduced just a few years ago by Schaffrin [2009] as TLSC for the case of independent and identically distributed (iid) data. Here the restriction of iid data is removed. The EIV models treated in this work are presented in detail, and thorough derivations are given for various TLS estimators and predictors within these models. Algorithms for their use are also presented. In order to demonstrate the usefulness of the presented algorithms, basic geodetic problems in 2-D line-fitting and 2-D similarity transformations are solved numerically. The new extensions to the EIV model presented here will allow the model to be used by both researchers and practitioners to solve a wider range of problems than was hitherto feasible. In addition, the Gauss-Helmert model (GHM) is reviewed, including details showing how to update the model properly during iteration in order to avoid certain pitfalls pointed out by Pope [1972]. After this, some connections between the GHM and the EIV model are explored. Though the dissertation is written with a certain bent towards geodetic science, it is hoped that the work will be of benefit to those researching and working in other branches of applied science as well. Likewise, an important motivation of this work is to highlight the classical EIV model, and its recent extensions, within the geodetic science community, as it seems to have received little attention in this community until a few years ago when Professor Burkhard Schaffrin began publishing papers on the topic in both geodetic and applied mathematics publications.

This report is substantially the same as a dissertation that was prepared for and submitted to the Graduate School of The Ohio State University for the PhD degree. Except for the omission of some pages from the front matter, a different acknowledgment page, and a change from double-space to single-space format, this report is identical to the dissertation, which contains 15 pages with Roman numerals and 116 pages with Arabic numerals.