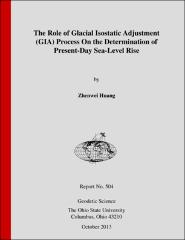 Global sea-level rise has become one of the major social-economic hazards associated with the consequence of global warming. The global sea-level rise signal is largely measurable by using geodetic observations including tide gauge and radar altimetry, over the last century and a half, and during the last two decades, respectively. The changes in the steric component (due to changes in temperature and salinity) and the mass component of the sea-level can be measured by in situ hydrographic observations (expendable bathythermograph or XBT, mechanical bathythermograph or MBT, and Argo) over the last six decades, and by data from the spaceborne gravimetry twin-satellite mission, Gravity Recovery And Climate Experiment (GRACE) over the last decade, from 2002–2012, respectively. Geodetic measurements, including tide gauge, radar altimetry and GRACE, are contaminated by the ongoing glacial isostatic adjustment (GIA) process that is the viscoelastic response of the Earth to the loading of glaciation and deglaciation during a glacial cycle. Traditionally the GIA effect is removed from various geodetic sealevel observations by using a predicted correction from a GIA forward model. In this study, theoretical treatment of how the GIA effect should be specifically addressed for correcting various geodetic sea-level observations is described, and the results of an accuracy assessment study using an ensemble of 15 contemporary GIA models is conducted to estimate the effect of the current GIA model uncertainty on sealevel and ice-sheet mass balance studies. We find that large discrepancies exist in contemporary GIA models and some of the models are not internally consistent with regard to the two theoretically predicted relations. Our result indicates that the GIA model errors could not be ignored in the study of the 20th century and present-day sealevel rise using modern geodetic measurements. Using the elastic sea-level fingerprint method, recent change in Earth’s dynamic oblateness (or J2 ), 2003–2012, resulting from present-day ice sheet and mountain glacier/ice cap mass losses is studied. Sensitivity test and result shows that the contribution of mass loss from regions such as the glaciers systems in the Canadian Arctic Archipelago and Alaska are not negligible, although the dominant contributor remains the Antarctic and Greenland ice-sheets. Combining different sea-level change observations (satellite altimetry, GRACE and Argo), published contemporary studies have claimed the ocean mass component of sealevel budget "closure", meaning that the two independent data types (de-steric satellite altimetry sea-level change and GRACE ocean bottom pressure change) agree with each other during 2004–2012. We argue that the sea-level budget is not closed, or it is a misclosure depending on the choice of a particular GIA model to correct the GRACE data. The limitation is primarily due to the error in the current GIA models, followed by short or inadequate data span (less than 10 years), and errors in the observations. To mitigate the GIA model error, we develop a method to address the possibility to separate GIA signal and the present-day mass change over the ocean by combining GRACE and stericcorrected radar altimetry observations. For the first time, our result demonstrates a iii potential separate of the GIA and present-day mass change signals, and thus proving an improved present-day mass component of the sea-level rise. The estimated averaged ocean GIA crustal uplift ranges from –0.49 to –0.65 mm/yr, compared to –0.29±0.08 mm/yr that is averaged using an ensemble of 14 GIA models. The estimated present-day ocean mass change causing sea level to rise between 2.23 and 2.39 mm/yr, as opposed to the steric-corrected sea level change from radar altimetry observations at 1.52 mm/yr. The limitation is the short data span and errors in the observations, including hydrographic data did not adequately sample the full depth of the ocean or in time, errors in the altimeter and GRACE data.