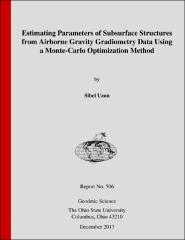 The inverse problem of estimating parameters (i.e, location, depth) of subsurface structures can be considered as an optimization problem where the parameters of a constructed forward model (gravitational model) are estimated from gravimetric observations collected on or above the Earth’s surface by minimizing the difference between the predicted model and the observations. This problem could be solved by traditional techniques such as the iterative Least-Squares Solution, or by innovative methods such as random search techniques. This dissertation presents a Monte-Carlo optimization method called Simulated Annealing (SA) to estimate the parameters of subsurface structures from airborne gravity gradient measurements. The SA algorithm is a directed random search technique and is based on Monte-Carlo sampling (Metropolis Algorithm) where the sequence of parameters is generated from a Markov chain with a convergent target distribution that depends on a parameter called "temperature". The Metropolis algorithm is applied sequentially to generate a sequence of parameters, at a fixed temperature, and then the temperature is slowly decreased to zero as the SA algorithm proceeds. Reducing the temperature enables the algorithm to narrow its search space, thereby increasingly focusing on the solution that minimizes the cost function. The algorithm is terminated when no further change occurs in the cost function, according to a predefined termination criterion. This technique is implemented for two applications where the parameters of a simulated anomaly, due to a right rectangular prism buried in a real field, and a real anomaly, due to a fault buried in a real field, are estimated. It is shown that the SA algorithm is able to estimate the parameters (location, depth and orientation angle) of the prism from one or more observation profiles of gravity gradients, according to the degree of the noise level of observations that are used. In the second application, the parameters of the real fault are estimated. Here, it is shown that the SA algorithm provides a very good estimate of the dip angle. It is thus shown that the SA algorithm is a robust inversion technique that may be applied to the geophysical inverse problem using gravitational gradients.

This report was prepared for and submitted to the Graduate School of the Ohio State University as a dissertation in partial fulfillment of the requirements for the PhD degree.