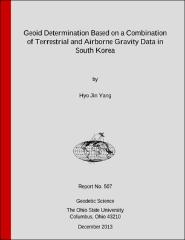 The regional gravimetric geoid model for South Korea is developed by using heterogeneous data such as gravimetric measurements, a global geopotential model, and a high resolution digital topographic model. A highly accurate gravimetric geoid model, which is a basis to support the construction of the efficient and less costly height system with GPS, requires many gravimetric observations and these are acquired by several kinds of sensors or on platforms. Especially airborne gravimetry has been widely employed to measure the earth’s gravity field in last three decades, as well as the traditional measurements on the earth’s physical surface. Therefore, it is necessary to understand the characters of each gravimetric measurement, such as the measurement surface and involved topography, and also to integrate these to a unified gravimetric data base which refers to the same gravitational field. This dissertation illustrates the methods for combining two types of available gravity data for South Korea, one is terrestrial data obtained on the earth’s surface and another is airborne data measured at altitude, and shows an accessible accuracy of the geoid model based on these data. It is found that there exists some bias between terrestrial and airborne gravimetric data probably due to their different properties, and the bias is significantly reduced by the terrain effects determined by the Bouguer reduction. Therefore, the gravimetric data should be merged to a unified data base in terms of the Bouguer gravity anomaly. The reductions are the important roles not only to combine gravimetric data, but also to satisfy the boundary conditions of the Stokes’s integral. The Stokes’s integral is applied to the unified gravimetric data set in order to model the geoid undulation for South Korea. Also the systematic effects on the fundamental equation of physical geodesy are numerically demonstrated on the gravity anomaly and geoid undulation. These are shown to be negligible. In addition, the limitations of the Stokes’s integral caused by truncation of the integration area and discontinuity of data are reduced by the empirical application of the Stokes’s kernel modification and the Remove-Compute-Restore technique. The demonstration of accuracy of the developed geoid model, which is compared to GPS/leveling, shows the model based on the gravity anomaly with respect to the terrain effects have better accuracy than the model based on the free-air gravity anomaly. The achievement on the precision of geoid undulation, computed on a 2 arcmin grid, is 5.6 cm in standard deviation. This model is based on the airborne-only gravity data considering not only the terrain effects but also the downward continuation. The bias in the gravimetric geoid of about 15.5 cm, determined from the comparison with the GPS/leveling data, agrees with previously determined values.

This report was prepared for and submitted to the Graduate School of the Ohio State University as a dissertation in partial fulfillment of the requirements for the PhD degree. The work was supported in part by a grant from the University of Seoul, Seoul, Korea, under the auspices of the Ministry of Land, Transport and Maritime Affairs, Korea.