To Sting or Not to Sting: When Social Parasites use their Venomous Weaponry 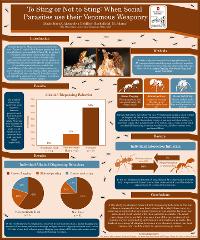 Socially parasitic Megalomyrmex symmetochus ants exploit their fungus-gardening host ants, Sericomyrmex amabilis, for critical resources using their alkaloid venom. This venomous weapon is often utilized during aggressive interactions between the two species. S. amabilis workers respond to parasite stings with either aggressive biting behaviors or submissive fleeing behaviors. Although it is harmful to the fitness of the colony to have parasitic guest ants, it is not as detrimental as colony death. A third raiding ant, Gnamptogenys hartmani, attempts to usurp nests of S. amabilis ants which can result in the annihilation of the colony. Non-host colonies are more vulnerable to these attacks, while parasitized S. amabilis colonies can benefit from their guest ant defenders, suggesting a conditional mutualism between the two species. In this study, we observed the stinging behavior of M. symmetochus towards host and non-host S. amabilis workers. We anticipate finding a smaller percentage of stinging behaviors toward host S. amabilis ants because parasites should avoid conflict with their host colony. Future work will analyze the toxicity of the venom alkaloids and the behavioral reactions of experimentally stung S. amabilis ants.