A Study of the Hippocampal Network via Persistent Homology 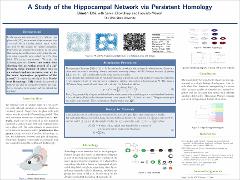 In the neuroscience community, it is believed that place cells (PC) in an animal’s hippocampus play a central role in forming mental maps, which are used by the animal for spatial navigation. Place cells are sensitive to location, in the sense that each place cell becomes active when the animal enter a specific area, called the cell’s place field (PF), in an environment. We study the following question: Given time series data showing the activation record of a sufficiently large number of place cells as an animal explores an arena, can we infer some topological properties of the arena? By employing techniques from Persistent Homology (PH) to study the network of cells we are able to accurately recover the number of obstacles in an arena that the animal has explored.