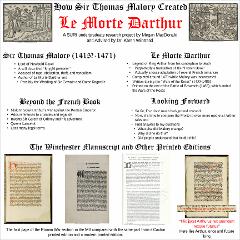 ​My project explores how Sir Thomas Malory (d. 1471) used real life events to shape his retelling of the popular tale of King Arthur. Malory wrote in England during a civil war known as 'The Wars of the Roses' (1455-1485). This conflict, sometimes called the 'Cousins' War', involved members of the royal family fighting to put different people on the throne of England. Malory's involvement in this dynastic dispute landed him jail, which was where he penned his famous Morte Darthur. I am not claiming that Le Morte Darthur is a roman a clef, but that Malory intentionally added details from his own life even though he claims everything comes from a previously written source. I began my research by simultaneously reading Le Morte Darthur in its original spelling, and secondary scholarship on the Wars of the Roses and Malory himself. During my research, I began to notice a pattern of footnotes mentioning how certain parts of Le Morte Darthur are not from a source that Malory claimed to be using. I also noticed how the new parts Malory was inventing matched something that had just happened during the Wars of the Roses. I compiled a list of plot details Malory invented that did not match a source and the list is very substantial. Naturally, everyone's life influences their writing in some way but the amount of times real life shows up in Le Morte Darthur leads me to believe that this is so much more than coincidence.​