Synthesis and Application of Imogolite Nanotubes 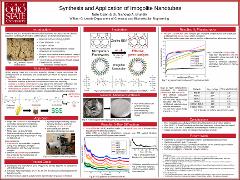 Catalysis provides a means to control the yield and increase the rates of reactions, thereby allowing for the creation of environmentally sustainable processes for manufacturing of fuels, pharmaceuticals, and chemicals. Nanotubes present a new and exciting shape-selective catalytic platform with the potential to be utilized in green chemical processes. Carbon nanotubes have thus far attracted the most attention, but are expensive, difficult to synthesize, and a potential health hazard. Imogolite nanotubes provide a potential solution to these issues presented by carbon nanotubes. The synthetic material is based upon naturally occurring aluminosilicate nanotubes found in volcanic soils and is obtained through a solution-phase, low temperature synthesis. The purpose of this study is to further investigate how the properties and structure of imogolite nanotubes can be tuned through changes to the synthesis. By tuning its properties, imogolite holds potential to be used in a myriad of useful applications such as catalysis, separations, and sensing. Through rational choice of starting materials, attempts were made to create hybrid versions of imogolite doped with heteroatoms. Once the syntheses were complete, the materials must be characterized to determine if the changes had any effect on the product. Nitrogen physisorption and X-ray diffraction were the primary characterization methods used to elucidate the porous nature and structure of the nanotubes. Preliminary results appear to show that nanotubes formed when tin and germanium were included, though it must still be determined if any significant property changes occurred. The work completed thus far includes the successful synthesis and characterization of pure imogolite, in addition to syntheses using germanium and tin. Future tasks include further syntheses of hybrid versions of imogolite and tests to determine their activity in several important catalytic reactions.