After the Spill: A Study of Vernacular Landscape in West Virginia’s Chemical Valley 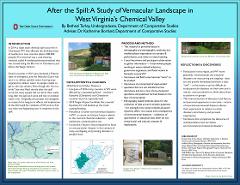 Initially this project sought to research the long term impacts of the 2014 Elk River chemical spill near Charleston, West Virginia – an event in which 7500 gallons of the coal washing fluid 4-methylcyclohexanemethanol (MCHM) leaked into the Elk River, upstream of the city water intake, contaminating the drinking water for nine counties and 300,000 residents. However, after starting fieldwork, I realized that the 2014 chemical spill is only one of many chemical, infrastructural, and natural disasters to occur in the region in the last few years. In 2015 the Yeager Airport in Charleston suffered a landslide that covered the homes below it, and most recently, in June 2016 flash flooding caused widespread damage of homes and communities in parts of Kanawha County along the Elk River. For this research I am interviewing residents of WV and using participant observation to collect information about experiences, concerns, conflicts, understandings, and long term implications of these environmental disasters-turned-controversies. This research is on-going throughout 2016, and I will continue to research how these disasters play out within the affected communities in WV and beyond. I anticipate that this work will continue to focus on issues of connection to home and place, the problem of bureaucratic management of people, the politics of disaster relief, and the need for local knowledge in facing challenges incurred, in part, by the particularities of WV’s topography and sociology of rural life.