African Spirituality's Influence on the Slave Experience in America 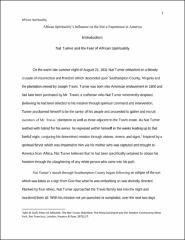 This thesis examines African spirituality and its influence on the lives of enslaved Africans in America. Earlier historiography suggested that Christian beliefs had a profound impact on the cultural attitudes of the enslaved black populations. My thesis dislodges this theory and ultimately offers a compelling appraisal to the contrary. Indeed, African spirituality was embedded in the cultural, political, social, and religious lives of Africans prior to the Trans-Atlantic Slave trade, insomuch that during the Middle Passage it was their spiritual connectedness which they held onto. My paper begins with the insurrection of Nat Turner and analyzes the fear that white planters had of African spirituality. Relaying that conversion to Christianity by enslaved Africans was minimal for the first century and a half of the slave experience, I present African spirituality as the paramount influence. Further, my thesis analyzes slave narratives showing how ritual worship was vital to the lives of enslaved Africans. Finally, I investigate the practice of conjuring and the religion of Hoodoo to display the processes through which enslaved Africans both protected themselves and developed a religious counter to Christianity. My findings show that there is a greater need to investigate the impacts of African spirituality on both sides of the Atlantic to deepen our understanding of the connection between African religions and Christianity both during the era of American slavery and modern times.