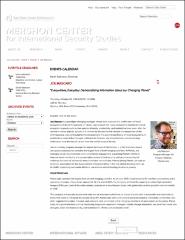 Planet Labs operates the largest fleet of earth-imaging satellites. As of June 2015, it had launched 87 satellites successfully and is operating in excess of two dozen spacecraft. By the end of 2015, the company will have the capacity to collect high-resolution imagery (3-5m per pixel) of the entire planet, captured on a very frequent basis, with global daily revisits possible near the middle of 2016.The company will provide access to its data set via web-based platforms, to ensure that the data is accessible and actionable to those who need it. Following the release of an API, Planet Labs will launch tools to assist developers, individuals, universities, and other organizations index, interpret, and consume data connected to the changing conditions of any location on the globe. Planet Labs will support missions such as monitoring large-scale vegetation changes, climate change adaptation, sea level rise, forest loss and gain, water and food scarcity, and humanitarian efforts such as disaster relief.