Better than the Truth: Extra-factual Sources of Threat Conception and Proliferation 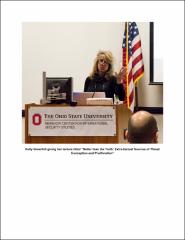 When uncertainty is high, and verifiable facts are inconvenient or few, how do people learn about what to fear and how to respond the threats they have identified? Ironically, verifiable, fact-based data is often particularly difficult to acquire when actors need it most: in periods of significant ambiguity and heightened threat, such as in the midst of wars, economic crises, and periods of domestic unrest. Under such circumstances, people are often left to glean what knowledge they can from an array of information sources of woollier provenance — such as rumors, conspiracy theories, myths, propaganda, and entertainment media. Drawing upon findings from an array of original public opinion surveys, survey-based experiments, and cross-national case studies, Greenhill will illustrate the sometimes surprisingly influential role that such sources of "extra-factual" information (EFI) can play in both the conception of national security threats and the formulation and implementation of government responses to such threats. Both micro-foundations of belief in these sources of EFI, and the macro-level consequences if and when such ideas become widely disseminated and adopted, will be explored.