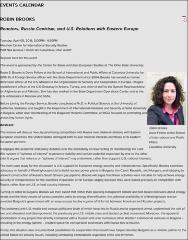 This lecture will discuss how, by prioritizing competition with Russia over bilateral relations with Eastern European countries, the United States damaged both its own national interests and those of its Eastern European partners. It engages the academic and policy debates over the desirability of resurrecting (or maintaining) the Cold War system of "spheres of interest" to preserve stability and contain potential expansion by one or the other side. It argues that reliance on "spheres of interest" may undermine, rather than support, U.S. national interests.The main case study for the discussion is U.S. support for European energy security and independence. Specifically, Brooks examines advocacy on behalf of Westinghouse's bid to build nuclear power plants in Bulgaria, the Czech Republic, and Hungary, and lobbying to prevent construction of Russia's South Stream gas pipeline. Brooks will argue that these activities were not able to help achieve energy security or independence for the countries in question or for Europe, largely because they were based precisely on competition with Russia, rather than on U.S. or host country interests.