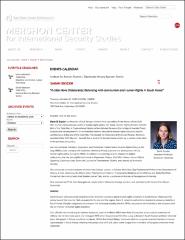 Sarah Snyder will explore the extent to which American concerns about human rights violations in South Korea influenced U.S. policy toward that country. Not unusually for the era and the region, the U.S. relied on authoritarian leaders to preserve stability in South Korea. Despite congressional pressure that increased steadily into the 1970s, successive administrations did not press their ally to improve its human rights practices.U.S. officials intervened only in extreme instances, such as in March 1963 when Park Chung Hee announced an extension of military rule for two more years and in August 1973 when they believed Kim Dae Jung, a dissident South Korean politician who had been kidnapped in Tokyo, would be murdered. Within the United States, there was minimal nongovernmental attention to human rights abuses in South Korea, meaning that pressure to shift U.S. policy came largely from members of Congress and lower level diplomats.Throughout the years, the United States remained largely reticent about human rights abuses in South Korea, content with a politically stable, anticommunist ally and distracted by more pressing problems such as the war in Vietnam. Top U.S. leaders only directed their attention at Park's regression when the instability it produced seemed to threaten U.S. interests in the region. Debate over U.S.-South Korean relations also highlight how salient Cold War concerns remained throughout the long 1960s even as the United States ostensibly sought detente with the Soviet Union and rapprochement with the Chinese.