The Challenges of Armed Group Organization in Socially Fragmented Environments 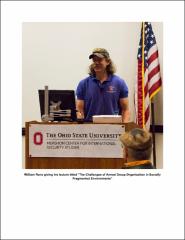 This research explains variations in how armed groups organize their relations with surrounding communities in the context of conflict in collapsed states. The collapse of central state authority tends to generate multiple armed groups that reflect and further promote social fragmentation. The norm is a situation of multisided competition, of symmetrical irregular warfare akin to violent competition among gangs. This environment creates obstacles to the formation of socially encompassing and mobilizing armed groups. Yet a few armed groups that appear in this context are able to assert their own guiding narratives and organizational codes. The argument is that variations in armed group autonomy to organize its own relations with communities in conditions of state collapse is related to the nature of pre-conflict relationships between community clandestine commercial activities and state regimes, and the pre-conflict relationships of armed group leaders to regime strategies of social control. This presentation draws from research in Iraq and Somalia and broader comparisons with contemporary and historical conflicts.