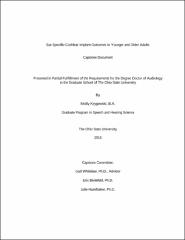 Auditory information is transmitted from the ear to the brain along an intricate network of structures that comprise the central auditory nervous system. It is well documented that the neural pathway from the ear to the contralateral auditory cortex is stronger and more efficient than the pathway from the ear to the ipsilateral auditory cortex (Lazard et al., 2012; Lipschutz et al., 2002). In the majority of individuals, a functional specialization of the left cerebral hemisphere exists for language processing (Geschwind, 1972; Geschwind & Levitsky, 1968; Kimura, 1961; Jancke et al., 2002; Tervaniemi & Hugdahl, 2003). Due to this crossed nature of the central auditory system, the right ear has direct access to the language-dominant cerebral hemisphere, which results in superior right ear performance, or the Right Ear Advantage (REA), on dichotic listening tasks (Kimura, 1967). A body of literature reveals that the REA becomes more exaggerated with increased age (Martin & Cranford, 1991; Strouse et al., 2011; Roup et al., 2006; Jerger et al., 1995; Jerger & Johnson, 1992; Bellis & Wilber, 2001). The increase in the REA in older adults, in the presence of symmetrical hearing sensitivity, is thought to reflect age-related degradation of the corpus callosum, which compromises the transfer of auditory information between the cerebral hemispheres (Bellis & Wilber, 2001). Speech information presented to the left ear preferentially stimulates the right auditory cortex and must be transmitted by way of the corpus callosum in order to be processed in the language-rich left auditory cortex. Superior right-ear performance is therefore demonstrated in older adults, due to the primary projection of the right ear to the dominant hemisphere. The present study aimed to determine if ear-specific differences in speech understanding exist in younger and older adults who underwent unilateral cochlear implantation. Post-operative performance on speech outcome measures (Consonant-Nucleus-Consonant words and AZ-Bio Sentences) was compared between younger adults (18-69 years) and older adults (70+ years). Results revealed significant benefits in speech perception following implantation for both younger and older adults. Ear of implantation had no significant effect on post-operative speech outcomes in either group.