Plotting the Effects of Industrialization: An Interdisciplinary Project 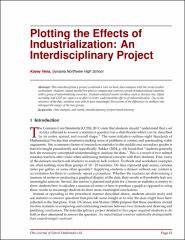 Ohio Council of Teachers of Mathematics

This interdisciplinary project combined a unit on basic data analysis with the social studies curriculum. Students created parallel box plots to compare and contrast a group of industrialized countries with a group of industrializing countries. Students analyzed twelve variables such as literacy rate, infant mortality, and GDP per capita in an effort to better understand the effects of industrialization. Due to the relevance of the data, students were able to have meaningful discussions of the differences in medians and interquartile ranges of the two groups.