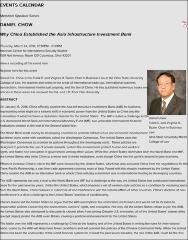 On January 16, 2016, China officially opened the Asia Infrastructure Investment Bank (AIIB) for business, representing what might be a seismic shift in economic power from the United States to China and the culmination of what had been a diplomatic disaster for the United States. The AIIB creates a challenge to the U.S. dominated World Bank and International Monetary Fund (IMF), two venerable international financial institutions created at the end of the Second World War. The battle over the AIIB represents a challenge by China to the leading role of the United States in writing the rules for international trade. Loans by the AIIB will likely have fewer conditions and will promote the policies of the Chinese Communist Party. While the United States has been the underwriter of the world financial system for at least the past seven decades, the rise of the AIIB, could be the first indication that China will succeed in its quest to displace the United States as the final arbiter of the rules of international trade in the twenty first century.