The Politics of Uncertainty: What Theory and History Teach Us about the Rise of China 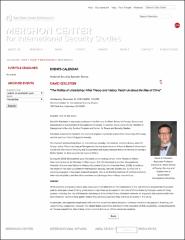 While scholars and policy makers alike have paid much attention to the implications of the rise of China, less attention has been paid to what past cases of rising great powers might lead us to expect in the case of China. Drawing from past cases of rising powers, including the rise of Bismarck's Germany and the United States, Edelstein presents an argument that explains both how Sino-American relations have gotten where they are today and how they are likely to evolve in the future. In particular, the argument emphasizes the role that uncertainty about long-term Chinese intentions has played in fostering, not undermining, cooperation between the United States and China and how it is the resolution of that uncertainty, not developments in Chinese capabilities, that is likely to be crucial to the future of Sino-American relations.