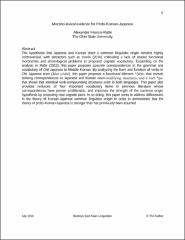 The hypothesis that Japanese and Korean share a common linguistic origin remains highly controversial, with detractors such as Vovin (2010) criticizing a lack of shared functional morphemes and phonological problems in proposed cognate vocabulary. Expanding on the analysis in Ratte (2015), this paper proposes concrete correspondences in the grammar and vocabulary of Old Japanese to Middle Korean. By analyzing the form and function of verbs in Old Japanese texts (Man'yōshū), this paper proposes a functional element *(w)o- that reveals striking correspondences in Japanese and Korean noun-modifying structures, and a verb *pə- that shows that identical verb-compounding structures exist in both languages. This paper also provides revisions of four important vocabulary items in previous literature whose correspondences have proven problematic, and improves the strength of the common origin hypothesis by proposing new cognate pairs. In so doing, this paper seeks to address deficiencies in the theory of Korean-Japanese common linguistic origin in order to demonstrate that the theory of proto-Korean-Japanese is stronger than has previously been assumed.