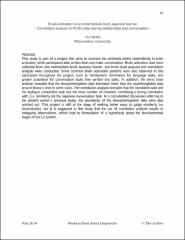 This study is part of a project that aims to examine the similarity and/or dissimilarity in brain activation while participants take written tests and make conversation. Brain activation data were collected from one intermediate-level Japanese learner, and trend chart analysis and correlation analysis were conducted. Some common brain activation patterns were also observed in this participant throughout the project, such as hemispheric dominance for language tasks, and greater activation for conversation tasks than written test tasks. In addition, the trend chart analysis revealed that the deoxyhemoglobin data increased more than the oxyhemoglobin data around Broca's area in some cases. The correlation analysis revealed that the translation task and the dialogue completion task had the most number of channels, exhibiting a strong correlation with (i.e. similarity to) the Japanese conversation task. In a consolidated discussion referring to the present author's previous study, the peculiarity of the deoxyhemoglobin data were also pointed out. This project is still at the stage of seeking better ways to judge similarity (or dissimilarity), but it is suggested in this study that the use of correlation analysis results in intriguing observations, which lead to formulation of a hypothesis about the developmental stages of the L2 system.